February 23rd, 2020, Atlanta, GA / Giselle Ave. Media — As Black History Month 2020 winds down, I couldn’t possibly leave this month without raising awareness about a young, black, talented queen creating her dream life — right now– in the form of art and inspiring originality! Honestly, this year’s black history month hit different. I’ve evolved so much spiritually that I no longer feel the need to wait for a designated month to acknowledge, what I consider, black herstory. With so much information at our fingertips, there’s legit no reason to remain ignorant about what type of amazing work and talent is being discovered daily. So, being the avid storyteller that I am, I’m so excited to share the story of Jalaiah Harmon, from my own point-of-view.

Reporting live from the Atlanta Times, this is Giselle on Giselle Ave. giving you the rundown on what’s going in the culture, our culture.

Jalaiah Harmon, 14, is from the suburbs of Atlanta, GA– or as well like to call it, The Soufside of Atlanta. Jalaiah is a dancer at Skydance Academy and reminds me of many black girls I know so well: very creative. I found her Facebook page bio, written in 2019, and thought, babygirl spoke this into existence!

In late 2019, Jalaiah created the “Renegade Dance” at home, and it took her like 10 minutes to finish it. Then, she taught it to her friends and they uploaded it to Dubsmash. Dubsmash is pretty much the cultural version of TikTok. Dubsmash is where the originality lives, and TikTok is where they steal the dances from Dubsmash, and make them “their own.” Last year, the dance started going viral on TikTok, leading to almost every (non-black) influencer doing the dance as a challenge on their pages! Let’s just say there was a LOT of money made from this dance challenge, and the capital was going into everyone’s pocket but the original creator.

Here’s the gag: unlike the Shiggy Challenge of 2018, no one actually knew who made up the dance, or perhaps no one really cared.

This is where Taylor’s article came into play.

Twas’ the day before Valentine’s Day 2020, and it was just another day on Twitter’s most elite group of them all — Black Twitter. I’m casually scrolling through my timeline, laughing and forming my own objective opinion (in my head, of course) about tweets I’m reading. I saw one of my writer sister friend followers share a comment about a New York Times article that had just been published within the hour. It was somewhere along the lines of:

“We’ve always created the culture, but they never give us OUR credit!”

This comment inspired me to start digging. It only took 2 quick searches before I found the original trending conversation, inspired by an article written by Taylor Lorenz for The New York Times, titled “The Original Renegade.” 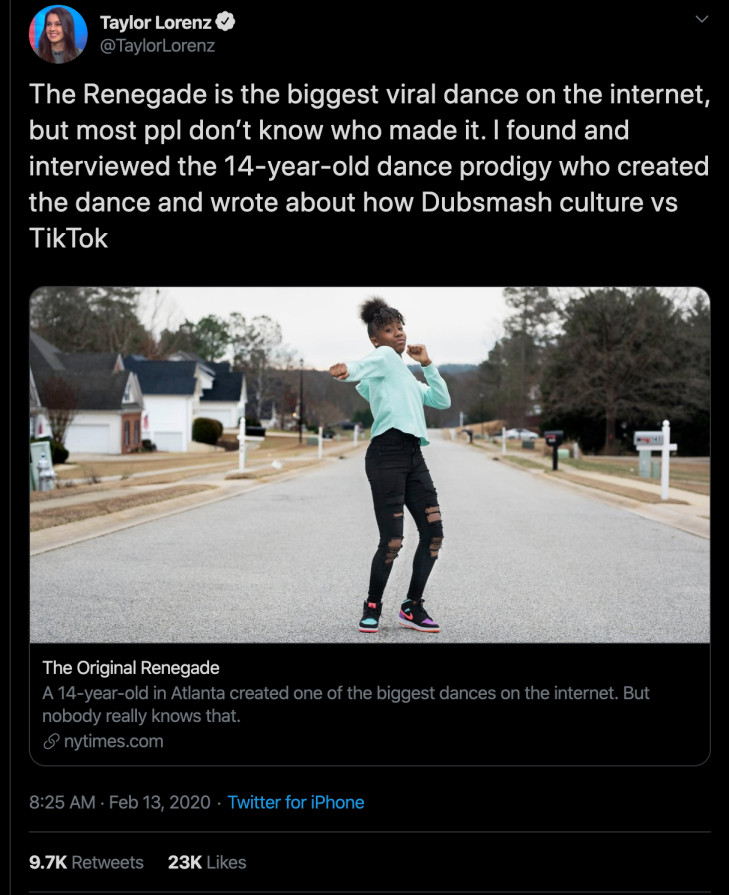 In short, it was only a matter of minutes before the article started trending in my own network. Here we have, the origin of viral content. Taylor is a true gem for finding Jalaiah and flying down to Atlanta to learn more about her story and how she came up with the current “it-dance move” of today.

Taylor, thank you for going the extra mile to share this inspiring story, you’re the REAL MVP!

The irony of this entire viral thread is that the dance title, “Renegade” is actually the name of the Producer, ReazyRenegade, who came up with this beat, on K. Camp’s single, “Lottery!” As in, the producer’s ad-lib in the song is “Renegade, Renegade,” and Jalaiah decided to call her dance that!

Our Young Queen has Gone Viral

Within 24 hours, Jalaiah’s Instagram following was surging! Her Instagram page grew from 30K followers to 70K, 80K, 90K, and currently–within one week of going viral, she has 353K organic followers! Jalaiah was invited to attend the NBA All-Star Game, within 3 days of the New York Times article posting!

Just two days ago, her star status was solidified, thanks to her invitation from The Ellen Show to perform on the show!

Back in my day (that’s very Auntie of me) as a young girl, I used to always makeup dances and share them with my friends. I didn’t know it was called “choreography” until I got older, but I knew I was really good at it. I was on the dance and cheerleading team, so being able to express myself through originality was always so much fun! Once a dancer, always a dancer. But, I decided to pursue other creative pursuits in college, and kept dance as a hobby of mine. I also talked myself out of being a dancer professionally because there weren’t many opportunities for black girls to make a living off of their gift!

That was then, this is now.

Thanks to social media, the playing field has been leveled and we ALL can create our DREAM life! But, it starts with really having the faith to put yourself out there, and do whatever it takes to make your dream, your reality. That’s what I’m doing today, that’s what Jalaiah is doing right now, and that’s what I hope this post INSPIRES you to do, too!

Jalaiah’s story hit home. She is a digital native and is a shining example of how to capitalize off of your own creativity!

The beauty of it all? Thanks to Taylor’s original article, and the outpour of sincere support from Black Twitter, Jalaiah was finally given the credit that was owed to her! Of course, she came online to thank all of her new Twitter fans for helping her go viral!

Our reply: WE DID IT!

Now if only I can get my 12-year-old niece to teach me how to renegade? That’s a story for another day.

Thank you, Jalaiah, for inspiring black creatives to simply KEEP creating, and your dreams will come true!

Kudos to Jalaiah’s parents for their support.

Yasss, Taylor for sharing her story.

And come through Twitter — for making this conversation go viral….